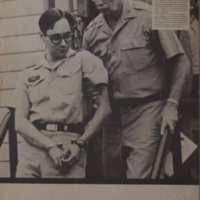 In 1967, Captain Howard B. Levy faced a court-martial after declining to provide medical training for Green Berets heading to the war zone in Vietnam, arguing that such a practice was against medical and his personal ethics. The trial received national attention and raised questions about the responsibility of military doctors to teach soldiers medicine, as well as an individual’s right to refuse to participate in war crimes. Levy served two years in prison for his actions and his case ultimately reached the Supreme Court.

New York Medical Committee to End the War on Vietnam