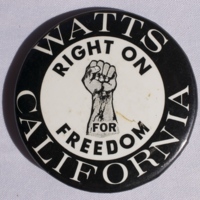 The Watts Uprising took place in Los Angeles, California, between August 11 and August 17, 1965. The rebellion was a community response to systemic racism and police brutality. As the Black Power movement grew during the second half of the 1960s, the Watts Rebellion became a potent symbol of more militant black responses to white supremacy and a renewed hope for urban revitalization in its wake.