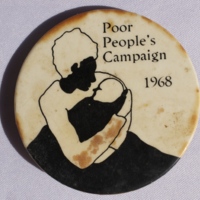 The Poor People's Campaign was an inter-racial movement of the poor organized by Martin Luther King, Jr., and the Southern Christian Leadership Conference. The campaign took shape in 1967 and sought to mobilize poor people from around the country to descend on Washington, D.C. to set up an encampment in the nation's capitol and demand a broad legislative agenda to aid the economically disadvantaged. King was assassinated prior to the PPC, though the SCLC continued on in his honor. In the end, rainy weather and internal divisions further undermined the event.