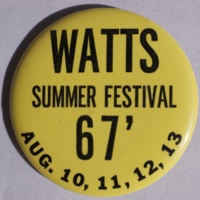 The Watts Summer Festival was created in 1966 in the wake of the 1965 Watts Rebellion by a coalition of anti-poverty organizations and black nationalist groups. The idea behind the festival was to redirect community energy into community pride, cultural awareness, political consciousness, empowerment and self-definition. The annual event, incorporated in 1968, sought to develop tangible positive solutions to the conditions facing urban ghetto communities. The Watts Summer Festival thrived in the 1970s and was immortalized in the film, Wattstax.