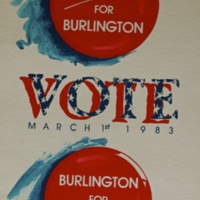 In 1983, Bernie Sanders ran for re-election as Mayor of Burlington, Vermont. Sanders, running as an Independent, narrowly won the mayor's office in 1981 by a margin of ten votes over his Democratic opponent, but won the 1983 election by a more comfortable margin, earning 52% of the vote, compared to 30% for his closest competitor. Sanders served three terms as Mayor of Burlington before moving on to the U.S. House of Representatives for sixteen years (1990-2005) and then the U.S. Senate in 2006, where he continues to serve. Bernie Sanders is the longest-serving Independent in U.S. congressional history. In 2016, Sanders mounted an insurgent campaign for the Democratic Presidential nomination, narrowly losing to Hillary Clinton, who went on to lose in the general election to Donald Trump.