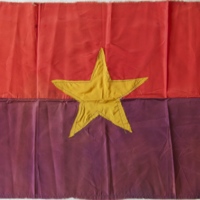 During the late-1960s and early 1970s, the flag of the North Vietnamese National Liberation Front (NLF) became an increasingly visible symbol at U.S. anti-war demonstrations, particularly among radicals. The presence of the flag was controversial.

Paul Saba, of the revolutionary Youth Movement II, wrote an essay, "Why We Carry the N.L.F. Flag," in 1969, which offered his justification for the use of the flag:

A lot of people get mad when they see young people carrying the flag of the National Liberation Front (NLF) in demonstrations. They call us traitors. They call the NLF the “enemy.” We carry the NLF flag because we believe that the fighting National Liberation Front of South Vietnam is the best friend of the people of America. We carry the flag to make a concrete show of our support for the victory of the Vietnamese fighting to drive the U.S. out of their nation.

The Vietnamese people have fought for 40 years to drive foreign invaders out of their land. First the Japanese, than they whipped the French, and now the United States. The Vietnamese have stated: “We shall never put down our guns until the last American soldier has left our soil.”

We oppose those politicians who call for a “just peace,” and “honorable peace.” There will be peace in Vietnam only when the Vietnamese have full control of their nation.

The Revolutionary Youth Movement (RYM) believe that Americans must support the right of self-determination for all nations.

The American people are hurt and hurt bad by the Vietnam war. We pay for it in every way with soaring taxes and prices, anti-strike laws and falling real wages, and most of all, with the blood and lives of our loved ones, who are killed in Vietnam. But the rich, who are the only ones who profit from this war, can continue to oppress and rob American workers only for as long as we will stand for the oppression and exploitation of other nations around the world.

These same fat cats who wage the Vietnam war will be drafting our men to South American and African countries where the people are fighting to throw out American businesses and landlords; and once again the people’s war against the imperialists will win. We can see that Vietnam is leading the struggle for self-determination, and that all the oppressed rations will follow. The ruling class in this country will try to use the American people to keep down the people in other nations. Just as here in the U.S. the rich have always played poor whites off against oppressed black people, and men against women.

We believe that there are only two sides in the struggle against exploitation and oppression. On one side, are the rising people of the oppressed nations. On the other side are the imperialists – the only ones who benefit from these wars. WE MUST CHOOSE THE SIDE OF THE OPPRESSED PEOPLE. A victory for the Vietnamese people will be n victory for us! This is why we carry the flag of the National Liberation Front of Vietnam.

VIETNAM WILL WIN!
U.S. OUT OF VIETNAM NOW!
SUPPORT THE NATIONAL LIBERATION FRONT AND THE PROVISIONAL REVOLUTIONARY GOVERNMENT!