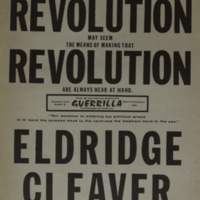 In 1966, Detroit cultural radicals, Allen Van Newkirk, John Sinclair and Gary Grimshaw created Guerrilla, “a monthly newspaper of contemporary kulchur” and “weapon of cultural warfare.” The newspaper was a part of a larger project, the Detroit Artists Workshop, which was formed in 1964, “a local attempt in self-determination for artists of all disciplines.” Guerrilla mixed “humor, politics and music under the circus big top of surrealism and pop culture.” It was primarily a cultural review and included an international artistic perspective. Soon after its first issue appeared, Van Newkirk, who was an revolutionary anarchist with an antipathy for the hippie counterculture and slackers, split with the Detroit Artists Workshop and fired Sinclair, who was more aligned with the hippie counterculture. Despite their ideological and political differences, the two, in fact, continued to work together on Guerrilla, though Van Newkirk’s vision predominated. In subsequent issues, Van Newkirk included a series of oversized political posters, including this one.

The text on this poster reads: "A Rule Of Thumb Of Revolutionary Politics / Is That No Matter How Oppressive The Ruling Class May Be / No Matter How Impossible The Task Of Making / Revolution / May Seem / The Means Of Making That / Revolution / Are Always At Hand." At the center is information on a publication, Guerrilla with the quote "our purpose in entering the political arena / is to send the jackass back to the farm and the elephant back to the zoo." At the bottom is "Eldridge / Cleaver / For President / Minister of information/Black Panther Party".

Eldridge Cleaver was the controversial "Minister of Information" for the Black Panther Party. Cleaver, who edited the Black Panther Party newspaper, is credited with crafting a more radical and incendiary public rhetoric for the organization. His 1968 book, Soul On Ice, was a best-seller, simultaneously praised and condemned, and much-debated. Cleaver was the presidential candidate for the Peace & Freedom Party in 1968, earning .05% of the vote. Following a deadly altercation with Oakland police that same year, Cleaver fled the United States, first to Cuba, then to Algeria and ultimately France, before he returned to the United States in 1975. An ideological split between Cleaver and party co-founder, Huey Newton, led to Cleaver's ouster from the party. Following his exile, Eldridge Cleaver became a born-again Christian, dabbling in a variety of different denominations. He also participated in conservative politics through the Republican Party. Cleaver died in 1998.

Guerilla: Free Newspaper of the Streets